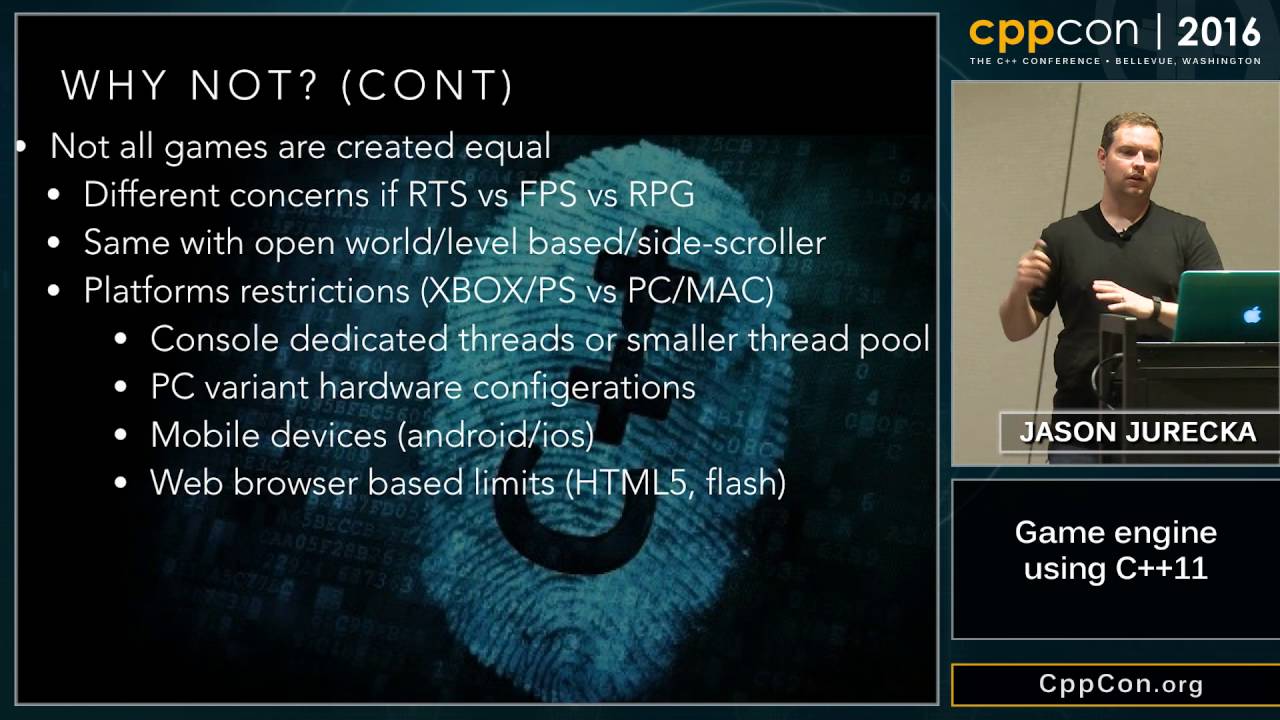 —
Presentation Slides, PDFs, Source Code and other presenter materials are available at:
—
This session is going to give an account of the process and features used to create a game engine focusing on using std C++11 features and concurrency. We will go through the architecture of the engine design and the specifics of the C++11 features being used. We will also go through optimization choices and design mentalities that are being used to keep the code base simple, but powerful in game usage. The engine architecture we will be going through will be using parallelism as a way to distribute work and get performance out of the available hardware that can scale into the future.

While completing a full engine with cutting edge graphics techniques and a game to push the engine to its limits will take a while this session will go over the current state of the project and lessons learned. The ultimate goal of the project is to show the validity of using C++11 (and beyond) features in game engines to simplify code and improve stability while maintaining the performance and memory usage games demand.
—
Jason Jurecka
Blizzard Entertainment
Senior Software Engineer
Jason Jurecka is a 12+ year engineering veteran of the game industry that has worked on titles in the full range of platforms from PC to next-gen consoles. He has done a wide range of tasks that include engine architecture, asset management, asset pipelines, gameplay features, task automation, tools/plugins/scripts for content creators, automated testing, game/toolchain optimizations, and many other generalist engineering tasks. Jason has contributed to titles such as Rise of Nations: Rise of Legends, Catan, Red Dead Redemption, Max Payne 3, Grand Theft Auto 5, Battlefield 4, Battlefield: Hardline, Call of Duty Black Ops 3, and Amazon’s Lumberyard Game Engine/Editor.
—
Videos Filmed & Edited by Bash Films: