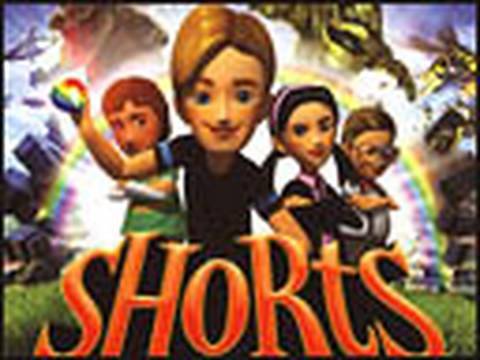 Classic Game Room HD reviews SHORTS for Nintendo DS, the Shorts movie was directed by Robert Rodriguez who also directed El Mariachi, Desperado, Spy Kids and Sin City. Shorts is a very average side scrolling platformer for the DS where you play primarily with the D-Pad and Nintendo DS buttons. This CGR review of Shorts the video game has gameplay from Shorts filmed in HD showing the video game play in action. Defeat enemies by shooting them, jumping on them and a variety of other methods. Play as characters from the movie and draw lines on the screen at times to climb on. Watch out for moving platforms, etc… Shorts is aimed at a younger audience and should appeal to kids who are into the film, parents should feel warm and fuzzy about the non-objectionable gameplay. Shorts is rated E 10 and packs some fairly good side scrolling 2D action (the backgrounds are 3D rendered but the game is basically a 2-D side scroller for the DS.)