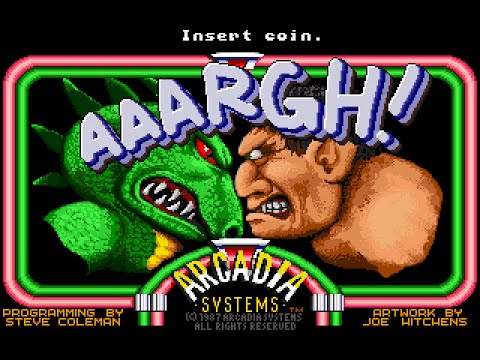 I wanted to record the standard version before this one because the already existing Amiga longplay of that version (talking about the one on the World of Longplays channel) has several flaws (didn’t eat people, sound delay, broken player animation…) and is in need of an update, but I too got the broken animation. It happens after level 1 and with the green dude. Tried different versions and settings, but nothing worked. One thing the other longplay has over this one is the longplayer played through with both characters.

The longplays community doesn’t allow game overs, which wasn’t a problem for the other longplayer as the standard version has several lives you can spend before getting game over. This Coin-Op version go game over after the first and only life is gone. I can of course continue over and over again by inserting more coins, but I don’t like that. I guess I could have used as many credits as the standard version has lives, but that would show the game over text every time in this version, so… bleh. I did it with just one life, which was SUPER hard. Spent over 4 hours on this game.

The hardest level was Egypt. I was chilling up to that point, but now the game got serious. From here on, I most of the time run around with just one hit point left (or whatever to call it), so just a tiny bullet-thingy would kill me. I died like 300 times throughout this longplay, but thanks to save states, you won’t see that Smile

I skip the egg on the castle level (10:40) as I noticed once I have all the 5 eggs, the game skips the rest of the levels and takes me straight to the final one. I didn’t take the next egg until the Taj Mahal/India (I think… 18:41) level. Took it before taking down more buildings as it was too hard to smash the rest.

A level is complete by either destroying all structures or getting an egg.

The game doesn’t have a visible health bar, so it’s best to eat whenever you can. I usually add game over/death at the end of the video, but forgot, so here it is instead:

This is far from a speedrun Smile All I have to do is to destroy the structures and I’m off to the next level, or collect an egg… but instead I just goof around a bit, eating some people, burning the huts down (which is super slow compared to smashing them down). I enjoyed myself in the beginning, but later on things became very difficult, which went from fun to frustrating.

The last level can be completed once the golden egg has been reached, but I decided to destroy all those structures first anyway in case something different would happen.

I’m using the latest version of WinUAE because it has the sound delay fixed, but at the cost of random crashes and sometimes messed up frame rates (can’t replicate, it just happens sometimes). So, two places in this video will have broken sound (sound delay, etc). The first part is 07:30-07:57, and the second one is 15:53-16:19. Sorry about that. If I wasn’t so lazy and the game wasn’t so damn hard, I would have replayed and fixed them.

Hmm, watching this video now makes me notice stuff I didn’t while playing. I didn’t know those red balls spawned wasps/bees. I bet I could punch those red eggs and destroy them, because if I try to eat them, I die. Would have made stuff easier.

There are many differences between this and the standard version, but not enough text space left to mention all of them.